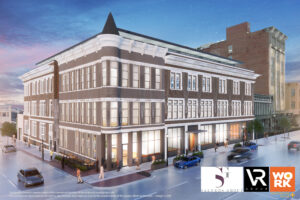 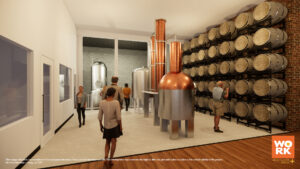 COVINGTON, Ky. – Two historic buildings on one of Covington’s most visible intersections will be developed by the same people who created Hotel Covington.

After several weeks of buildup, the City of Covington, Salyers Group, and vR Group today announced a $22.5 million-plus renovation and re-imagining of the former YMCA building and Gateway Bookstore at the corner of Madison Avenue and Pike Street.

With much of the two buildings’ 72,000 square feet of space having sat vacant since 2015, Salyers said the mixed-use development will include:

The development is projected to create over 100 jobs, not including potential office tenants.

“We’ve labored quietly for three years to create a new future for this important site, and we’re thrilled to partner with a developer – the Salyers Group – that has a history of delivering on big projects in Covington,” Mayor Joe Meyer said. “For too long this corner has been all but vacant, but soon it will be attracting tourism, over 100 jobs, and a restored storefront to the YMCA building.”

Covington bought the buildings from the Kentucky Community & Technical College System for $1.69 million in late October and will recoup its investment by selling the site to the Salyers Group. The City’s involvement as the middleman was necessary for the deal to happen. 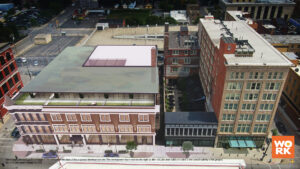 Covington officials pointed out that the project will produce a positive return on investment for the City through new payroll taxes and increased property values. It will be one of the first projects to take advantage of Covington’s federally designated Opportunity Zone.

Guy van Rooyen, president of the Salyers Group, said the ground-breaking is scheduled to occur in January 2020.

“Our family has a long history of investing in downtown Covington, and over the years our investment in building and operating a hotel, reception halls and retail businesses have helped bring hundreds of thousands of people to the city,” van Rooyen said. “We see this development as the next catalytic project to further the current momentum in Covington and a great opportunity to restore another historic building in the heart of this wonderful community.”

Van Rooyen gave details about the future development this morning during an announcement at the site and also released renderings of the finished project. The over-72,000 square feet of space is spread out through two adjacent three-story buildings:
According to van Rooyen, the street-level commercial space will include an authentic urban distillery and bourbon experience for both locals and tourists, plus 10,000 square feet of commercial office space.

The upper floors will be converted into 60 VIP and Presidential suites as a complement to the Hotel Covington’s nationally recognized hyper-local tailored experiences and amenities. The new suites will each have kitchenettes and will range from one-bedroom lofts of 400 square feet to three-bedroom penthouse suites of 1,500 square feet. A rooftop addition will offer more modern rooms with private terraces with great views of Covington. Each room will be catered to and serviced by the ever-expanding team at Hotel Covington and will thematically honor the rich history of the YMCA – a storied Covington landmark.

Covington Economic Development Director Tom West said the project was significant because it would: 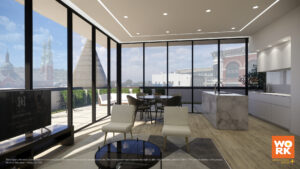 “We’re really focused both on creating jobs and on nurturing developments that help us attract employers who then create jobs,” West said. “By working closely with the Salyers Group, we will do both with this multi-layered project.”
Meyer praised the willingness of state and local leaders to help make the project happen. “We’ve been working a long time with a whole team of people on both the state and local levels,” he said.
The Salyers Group is a diversified investment company whose portfolio companies include Donna Salyers’ Fabulous-Furs, The Madison Event Center, Donna Salyers’ Fabulous-Bridal & Hotel Covington. vR Group is the private investment firm of the van Rooyen family.